Original music composed by Henry Jackman and Matthew Margeson 1. Manners Maketh Man
2. The Medallion
3. Valentine
4. To Become A Kingsman
5. Pick A Puppy
6. Drinks With Valentine
7. Skydiving
8. Shame We Had To Grow Up
9. Kentucky Christians
10. Curious Scars And Implants
11. Toast To A Kingsman
12. An 1815 Napoleonic Brandy
13. Eat, Drink, And Paaaaarty
14. Calculated Infiltration
15. Out Of Options
16. Hand On The Machine
17. Finale
18. Original Valentine Ideas (Demo Suite)

Listen to the full songs from the Kingsman: The Secret Service score
Additional film music – songs that are not included in the official soundtrack list,
but are playing in the movie. 1.

Give it Up – KC & The Sunshine Band

Get Ready For It – Take That

Money For Nothing – Dire Straits

Watch the trailer for Kingsman: The Secret Service

The Doors - Five To One (Official trailer)

Eggsy driving the car he stole from the gang, in front of the police car.

Eggsy drifting with the car he stole from the gang in the bar. Then, driving away from the cops.
[14']

In the club, Egsy, Roxy and Charlie trying to win their target over. Right before the train test.
[59']

People killing each other around the world. The heads of the people from bunker exploding.

Eggsy entering the room of the princess with champagne and glasses. End credits song.

9. Money For Nothing – Dire Straits

Scene where they trigger the chips and the explosions start. The heads start to explode. 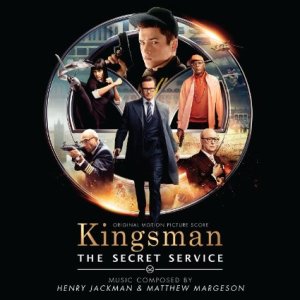