The Watch Movie (2012) Soundtrack List – Tracklist – OST – Listen to Original Theme Music from the Motion Picture, film score list, all songs list – playlist, who sings them, including end credits. Below you can view The Watch complete soundtrack list: 1.

You ain’t seen nothing yet – Bachman

I got mine – The Black Keys

People are strange – The Doors

You and tequila – Deana carter
15. All things aside – Erika jane

Boyz In the Hood – Eazy E

Additional film music – songs that are not included in the official soundtrack list,
but are playing in the movie. 1.

Watch the trailer for The Watch

You Ain't Seen Nothing Yet - Bachman-Turner Overdrive (Official #2 trailer

How do you rate this soundtrack?

Listen to free radio and find all the songs:

[52'] Everyone has their picture taken with the alien

2. You ain’t seen nothing yet – Bachman

5. People are strange – The Doors

[56'] The watch suspects everyone of being an alien

[38'] The guys break objects with the grey ball they found

[30'] Even catches the kid that threw eggs at them

[1h] Abby tries to seduce Evan when he gets home

[10'] Evan cries while he drives away from the crime scene 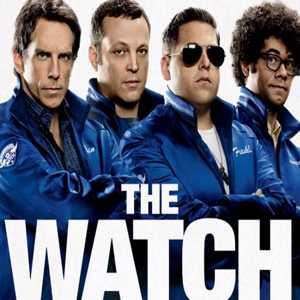