What to Expect When You’re Expecting Movie (2012) Soundtrack List – Tracklist – OST – Listen to Original Theme Music from the Motion Picture, film score list, all songs list – playlist, who sings them, including end credits. What to Expect When You’re Expecting Soundtrack Information: Audio CD (May 22, 2012)
Number of Discs: 1
Format: Soundtrack
Label: Capitol Below you can view What to Expect When You’re Expecting complete soundtrack list: 1. Happening (Clean) – Chiddy Bang
2. Don’t You Want Me (2012 – Remaster) – The Human League
3. Oye Como Va – Kinky
4. Inside Out – Nire’ AllDai
5. Get It Daddy – Sleeper Agent
6. Modern Art – Black Lips
7. Why Don’t We Get Drunk – A1a
8. Addicted To Love – Robert Palmer
9. Home – Edward Sharpe & The Magnetic Zeros
10. Stare Into The Sun – Graffiti6
11. Now Is The Start – A Fine Frenzy
12. Forgetting – David Gray
13. The Hormone Song – Wendy The official soundtrack for “What to Expect When You’re Expecting” will be released by Capitol Records digitally on May 15th, 2012 and physically on May 22th.
The soundtrack album includes songs from Chiddy Bang, Robert Palmer and David Gray to name a few. What to Expect When You’re Expecting Film Information: Genre: Comedy, Drama, Romance
Movie Release date: 18 May 2012 Plot:
A look at love through the eyes of five interconnected couples experiencing the thrills and surprises of having a baby, and ultimately coming to understand the universal truth that no matter what you plan for, life doesn’t always deliver what’s expected. Director: Kirk Jones
Writers: Shauna Cross (screenplay), Heather Hach (screenplay), and 1 more credit »
Stars: Cameron Diaz, Matthew Morrison and Dennis Quaid Below you can listen to Soundtrack (full samples of the songs, as they appear in the movie): 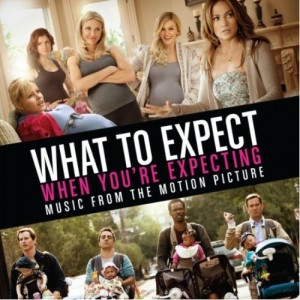