Legend Soundtrack List Movie (2015) – Tracklist – Listen to full soundtrack songs, the playlist of all of the songs played in the movie, trailers songs, what songs and who sings them, including end credits. Legend Soundtrack Details:

He’s In Town – The Rockin’ Berries

I’m Into Something Good – Herman’s Hermits

Chapel Of Love – The Dixie Cups

Make The World Go Away – Duffy

Your Race Is Run – Carter Burwell

What Do You Want – The Yardbirds
4.

Strut Around – The Graham Bond Organisation
6.

I’m Gonna Move To The Outskirts Of Town – Rod Stewart
7.

Hung On You (Single Version) – The Righteous Brothers
9.

They Can’t Convince Me – Ronnie Scott
10.

I Wanna Put A Tiger In Your Tank – Alexis Korner’s Blues Incorporated (feat. Cyril Davies)
13. Grow Your Own
14.

Back In My Arms (Single Version (Mono)) – Hattie Littles
15.

Come On Do The Jerk – Smokey Robinson & The Miracles
16.

Watch the trailer for Legend

Plays as Frank drives Reggie to see his brother, Ron. After his first talk with Frances in front of her house.

Frances is preparing to go on her first date with Reggie Kray, as her mother opposes it.

Charlie Rirchardson's gang, the torture gang gets introduced by the narrator while torturing someone. First time they're mentioned in the movie.

6. I’m Into Something Good – Herman’s Hermits

Plays as Reg kisses Frances in his car. After Charlie Richardson goes to prison and the Krays take over London.

Woman sings it live in Reg's club as he dances with Frances. Just before Reg gets called to serve his last 6 months. Krays' ascension.

Plays live at Esmeralda's Barn after Frances visits Reg in prison. Ron gets on the stage, too, but only to make a fool of himself. Reggie buys the Hide-A-Way club as a Christmas present for Frances.

9. Chapel Of Love – The Dixie Cups

Reg and Frances get married. Plays right before the religious ceremony, as everyone had arrived at the event.

Plays as Frances enters the church at her and Reg's wedding.

After Ron gets away with murdering George Cornell. Plays as Frances is alone in her room, sad and suffering. As it's heavily raining, she tries to put the cover on top of her car.

Plays live, at Reg's club, after he had been acquitted for the Boothby scandal. After leaving Reg, the moment when Frances takes a lot of pills to kill herself.

Plays in background at the pub where Reg finds out that Nipper's close to getting them. Before the Christmas party where he kills Jack 'The Hat'.

16. Your Race Is Run – Carter Burwell

Last scene of the movie, Reg leaving after killing Jack 'The Hat'. 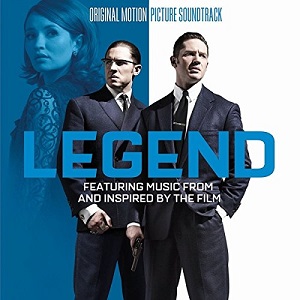