Spy Soundtrack List Movie (2015) – Tracklist – OST List – Listen to Original Score and full soundtrack songs, film score list, the playlist of all of the songs played in the movie, who sings them, including end credits and scene descriptions. Spy Soundtrack Details:

Who Can You Trust – Ivy Levan

Kill of the Night – Gin Wigmore

Listen to the full songs from the Spy soundtrack

Listen to all the full songs from the Spy score in a playlist
Additional film music – songs that are not included in the official soundtrack list,
but are playing in the movie. 1.

Watch the trailer for Spy

Cooper leaves to the airport for her first mission. Before arriving in Paris.

Last scene of the movie. Cooper and Nancy heading back to CIA.

Plays in the club, as Cooper finds out that Lia (the woman who tricked Ford in Paris) is the one making the offer for the bomb.

In Paris, Cooper chases Ford so she would warn him about the guy who changed his backpack.

Cooper and Rayna get to Budapest.

After picking her up at the airport, Aldo drifts Cooper through Rome, to DeLuca's place.

8. Kill of the Night – Gin Wigmore

Cooper escapes from Rayna's capture and drives to DeLuca's residence. Before the sell.

In Rome, Cooper changes into a beautiful black dress so she'd get into the casino to track DeLuca.

Plays live in the club as Lia arrives to make her offer. Nancy jumps on 50 Cent so she'd create the diversion Cooper asked for.

In Budapest, Cooper changes appearance again - short hair and bangs. Right after she and Rayna arrive at the hotel. 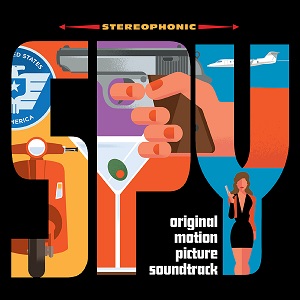