I Wanna Dance With Somebody (Who Loves Me) – Marius DeVries
5.

Additional film music – songs that are not included in the official soundtrack list,
but are playing in the movie. 1.

I Wanna Dance With Somebody (Who Loves Me) – Meredith Anne Bull

3. Without You – Meredith Anne Bull
4. I Gotta Feeling – Bob Einstein and Peter Stormare

People Are Strange – The Doors

Listen to the full songs from the Strange Magic score

Watch the trailer for Strange Magic

How do you rate this soundtrack?

[2'; 8'] Marianne sings it while trying to get a primrose petal.
Marianne and Roland sing it when preparing for their wedding,
right before she sees him kissing another fairy.

[10'] Heart broken, Marianne starts singing it in her room and then outside.

[14; 1h 33'] Sonny sings it to Dawn when she's worried about not being liked by one of the boys at the ball.
End Credits - second song.

[18'] Roland sings it to Marianne at the ball, asking for her forgiveness.
She answers back.

[26'] The Bog King sings it after finding out Sunny is in the dark forest,
looking for the primrose petal.

[32'] Sugarplum, the fairy witch sings it when Sunny gives her the
primrose petal to make the love potion.

[38'] Sunny sings it at the second Elf Spring Festival.

[41'] The Bog King sings it when he and his goblins crash the second Elf Spring Festival
to get the love potion back.

[58'] Marianne sings it when attacking and fighting the Bug King so that he'd release her sister.

[1h 12'] Marianne and the Bog King in the dark forest, sing this together,
as they fall in love under the moon light.

[1h 26'] Dawn sings it to Marianne to convince her to tell Bog King that she loves him.
All goblins sing it to Bog King so he'd say it back to Marianne.
They both sing Wild Thing together.

[7'] The little elves sing it to Marianne as she doubts Roland's love.

2. I Wanna Dance With Somebody (Who Loves Me) – Meredith Anne Bull

[22'] Dawn sings it at the ball, dancing with different boys, and Sunny watching her from outside the ball room.

[1h 04'] Two of the goblins sing it to the Bog King and Marianne - arranged by Griselda, the Bog King's mother.

[54'] The instrumental plays as Imp spreads the love potion all over. Then,
Thang sings it when Sunny takes the potion back from Imp.

Instrumental plays when Roland's army marches through the dark forest.

9. People Are Strange – The Doors 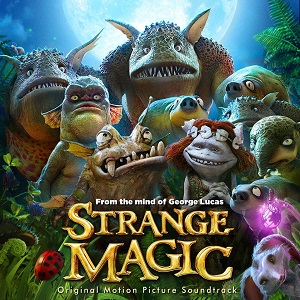